Many ways of preserving the Nakagin Capsule Tower were attempted, however, the project was severely affected by the pandemic that spread across the world. Unfortunately, demolition work started on 12 April 2022.

What makes the Nakagin Capsule Tower different from other valuable cultural assets that are being demolished is that even if the building itself were to disappear from this location, it could be metabolized and its architectural concept would be passed on to future generations.
During the tour, the current status of the demolition and how the project will proceed will be presented through dialogue. There will also be a live broadcast from the site, which can only be seen at this very moment.

It is obviously heartbreaking that this masterpiece will no longer exist in Tokyo, but the tour will support Capsule Tower as it takes the next step forward in a positive direction.

This would be our last online tour at Nakagin Capsule Tower and to say goodbye to the capsules.
This time, we would have legendary Nakagin Capsule Tower lover DJ, cosplaykoechan as a guest who has been watching the demolishment from the adjacent building almost every day. We will ask about how she feels about the whole process and what she has been working on to express what’s going on at the very moment.
Don’t miss this great interview looking down the demolition site.

Professional Guide too passionate about the Nakagin Capsule Tower.

How does this work?

This experience is hosted online. Once you book, you'll receive an email with a link and details on how to join by day before.

You no longer need to take trains and subways (nor planes!) to come all the way to the Nakagin Capsule Tower! You can enjoy from your living room computer or ipad, from the comfort and safety of your home.

Thank you for your support

This tour is supported by the Nakagin Capsule Tower Preservation & Restoration Project.

What time is 4 pm JST in my time zone? → Time Zone Converter

Please contact us for your requested time and date! 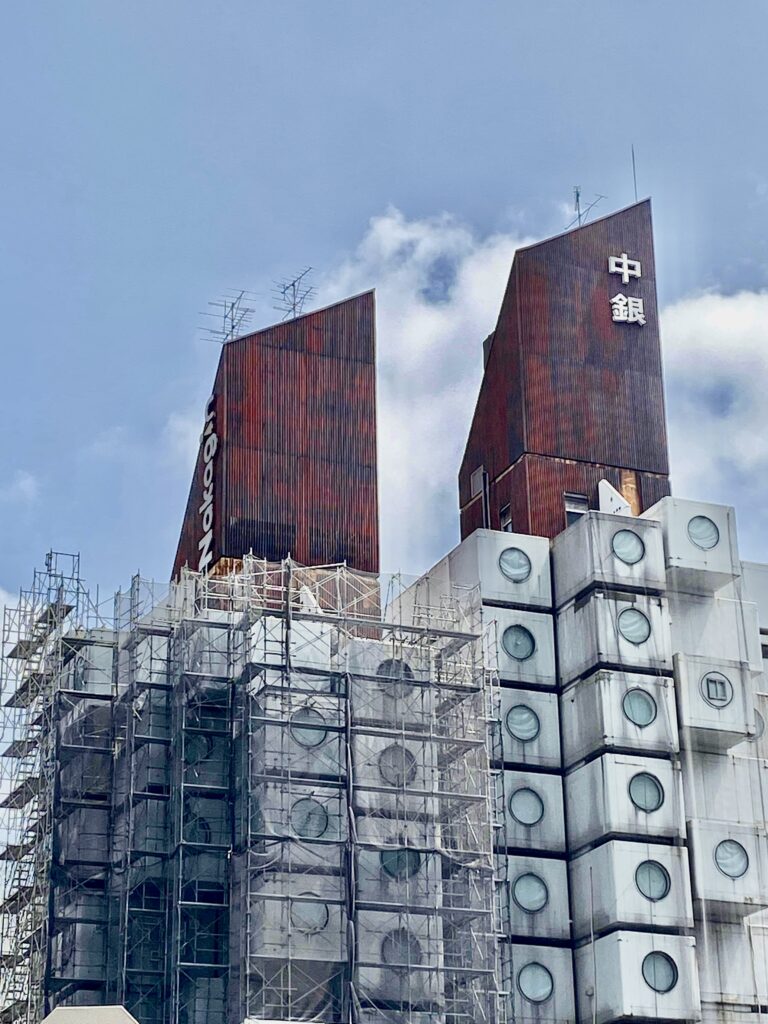 If you are unable to attend due to the time difference, recordings are available for 5days after the tour.

Send us message if you have any trouble booking!
contact us

What time is 4pm Tokyo time in my city??
Time Zone Converter

We will gladly accept online payment via stripe.

Send your friends and family an Online experience!

Thank you very much to Yoshi and Yuka for guiding us through the ONLINE Nakagin Capsule Tower tour today and giving us the opportunity to say goodbye to the to the towers !
I really enjoyed the visit and the material they provided us with. The photos were absolutely amazing and very well-concocted. The live part was a very nice surprise and gave me an exciting taste of a “real” visit. The extra-time discussion was also lively and pleasant. I really appreciated it!
Thank you for bringing this piece of Japan to Italy! Hope to meet you in person and again on the web.
Coco M from Italy
May 2022
The tour is worth joining because it’s very informative and they explained NAKAGIN Capsule Tower in detail. Through this tour, I could deepen my knowledge of the concept of the architecture as well as of the tower itself. I am also happy to experience the historic building demolition. I'm sure that the demolition will create something new. I want to join another architecture tour in person someday.
Aiko from Japan
May 2022
It was a pleasure to learn more about the tower and its context and details.
The presentation was clear and straight to the point, balancing specific knowledge with contextual information and accessible for both specialists and non-specialized audiences.
It would be lovely to have a real visit. Hope this pandemic fades away soon and I can find my way to Tokyo, which I would love to.
André Tavares, architect, Portugal
July 2021
I have been interested in this Nakagin Capsule Tower tour for a long time, and even it was virtually, I really enjoyed it. The tour is packed with information, historical photographs and images. I was really impressed with the preparation and kindness of the architect Yasuo and guide Yuka. They answered all my questions and it was great to talk with them about the building and Kurokawa. The Capsule Tower is really worth a visit, even virtually, it's a building with a unique look and history.
Josephine from Italy
June 2021
What a nice experience to join the Nakagin capsule tower online tour today. Our guide was so knowledgeable and eager to explain all about Nakagin Capsule Tower that I fully understood history, building structure and concept and how she and her team love this building. Photo, video and Power Point were effectively used to show the inside/outside of capsule, background of Japanese architecture and its aesthetic value. Hope Nakagin will be preserved in the future and Looking forward to joining actual tour someday again.
Nobu from Japan
June 2020
I greatly enjoyed and consider myself to be very fortunate to have had the opportunity. Very positive for me was that you clearly have a true interest in the tower and enjoy sharing your knowledge of its history and status. That makes all the difference and is the basis a good tour. I liked the way you involved us in the discussion and asked for views and opinions. I think you got a good balance between the presentation side and the interaction side. The technology worked well. Before the tour I was not familiar with Zoom, but found it quite easy to use, so I think you picked a good platform.
Phil from UK
May 2020
Comments are closed.