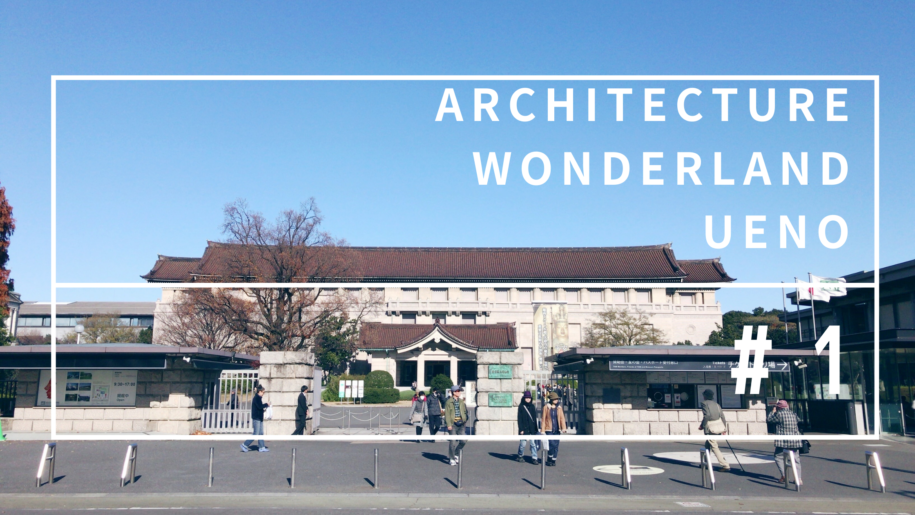 After the renovation in 2020,  the ticket gate of JR Ueno station (Park exit) had moved slightly and became a direct entrance to Ueno Park.

Ueno Park is quite well-known for the zoo, cherry blossom viewing, and many museums on its grounds. But not too many people know that the park is an architectural wonderland.

You can see neo-Baroque architecture, modernist architecture, beautifully renovated brick architecture, and much more in this park but I often feel that these great works aren’t much known.

So let me introduce some of the great works here and explain why you should visit Ueno Park when you are in Tokyo!

Tokyo National Museum
A place where you can see the history of Japanese architecture at a glance.

A place where you can see the history of Japanese architecture at a glance.

In addition to the Main Gallery “Honkan” in the cover photo, there are 6 more facilities, along with a Japanese garden and a tea room on the grounds of the Tokyo National Museum.

I simply can not cover everything today, so I’ll limit myself to architecture built every 30 years from the early 1900s to the present day.

Although it is a Neo-Baroque style building, there are many Japanese designs, such as Shinto shrine “Komainu”- looking bronze lion statues beside the stairs (one with its mouth open and the other with mouth closed) decorating the building.

Like Katayama mentioned, “Buildings must be works of art,” you can feel his uncompromising approach not only from its gorgeous appearance but also from the interior design.

The highlight is the openness of the entrance hall.
A fine decoration of the central dome ceiling, the stairs with elegant curves,
and the soft light from the skylights, which was designed at times when artificial lighting was not available, would welcome you warmly.

This facility is open to the public only on special occasions, don’t miss an opportunity if you get a chance!

This is Japan’s first “museum” facility.  In this museum, you can find any historical artifacts of Japan, from samurai helmets to fusuma paintings, ceramics, or Buddhist statues.

The first main building on this site was a brick structured facility designed by British architect Josiah Condor, who was invited by the Japanese government as a specialist to introduce the engineering technique of the West to Japan.

Unfortunately, the first building was collapsed by the Great Kanto Earthquake in 1926.

It turned out that brick construction that imitates the advanced design of the West was not applicable in the same way in an earthquake-prone country like Japan.

For the reconstruction plan after the earthquake, the proposal by Jin Watanabe, who designed the famous Ginza WAKO building, was adopted.

Under the influence of some nationalistic ideas in the early 20th century, a museum building with Japanese traditional curved roofs and decorations, in a considerably exaggerated form compared to the original design, was completed.

The carriage porch located in a straight line from the fountain square of the park shows who dominates this area.

Learning the historical background of the stately atmosphere of this building, it may give us a different outlook.

An exhibition hall housing works of art from Asia, India, Egypt in a stilted structure with the motif of a traditional Japanese wooden temple. The Japanese-style exterior with a gently sloping gable roof, front columns, and a large terrace that doubles as eaves around the building looks simple yet modern.

The atrium space from the 1st to 5th floors of the building has intermediate floors. Combined with the effect of dark lighting, you may feel as if you are lost in the mystical temple.

A newly built museum that houses the treasures of Horyuji Temple, which was nearly destroyed due to the anti- Buddhist movement happened around the 1870s.

The square box-like appearance was inspired by the nest of traditional boxes used to protect the treasure (a set of boxes graduated in size so that each fits into the next larger one).
The harmony between their collection of the antique from the 7th century and the simple contemporary design is just spectacular here and you will be mesmerized from the very entrance. A breathtaking water feature leading you to the entrance makes you feel as if you are walking on the water!

Yoshio was nominated as a designer of the expansion Museum of Modern Art, New York after the completion of this work.

Yoshiro Taniguchi, the designer of the Toyokan mentioned previously with such a similar name, is Yoshio’s father.
It’s fun to see the co-starring of father and son in the same complex.

Just too much to see…

The National Museum of Nature and Science (1931)

From dinosaurs to Hachiko dog, from human evolution to space, this museum is fun for any generation.

Here is another imposing-looking neo-Renaissance-style building. Having a closer look at the

uneven scratch tile * facade and the curved finish stones, the building actually have the soft and welcoming impression. 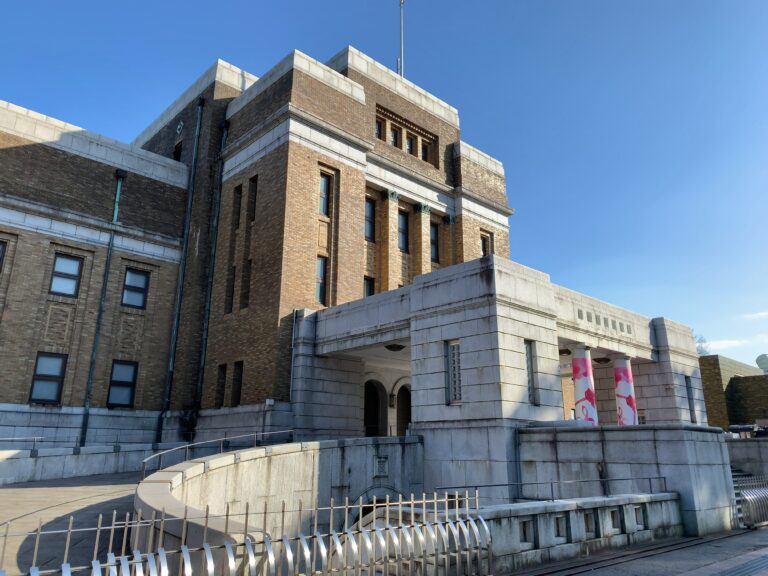 Unfortunately, it is currently not possible to enter from the front entrance of the carriage porch, but the atrium hall of the Japan Pavilion which is just behind the main door is the masterpiece.

You can thoroughly appreciate the stained glass with a phoenix motif designed by Sanchi Ogawa at the top, which was created based on the design of Chuta Ito from each floor since the corridors

Plaster art and tile mosaics on the ceiling and walls are also worth checking out.

The exhibition volume is amazing in the Japan Pavilion (in the photo) itself, but there are many highlights in the Annex Earth Pavilion as well.

It takes a lot of time and energy to see the whole exhibition and the building together, so be prepared!

*A tile with a fine groove pattern that looks like it was scratched with a comb. It became popular in the early Showa period (1926- 1989).